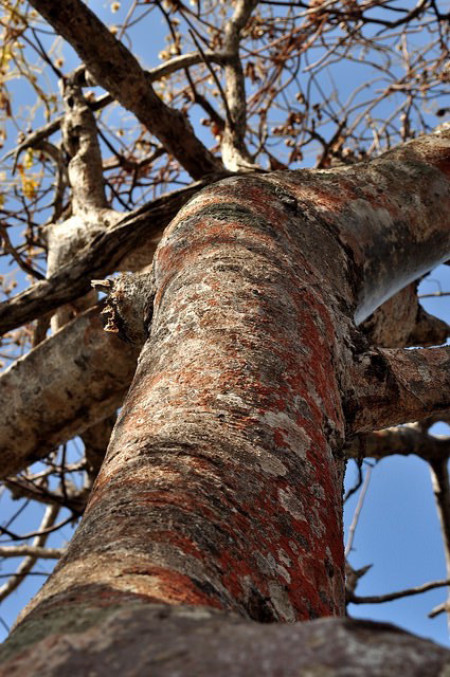 There is a video (which you can find on YouTube) of Eric Clapton playing Danny Boy. He introduces it by saying that he’s held off from making a recording of this song before because it somehow demands so much respect that when he sings it it makes him feel like a pub singer. So the only way he can approach it is as a solo instrumental on accoustic guitar, playing with ‘the maximum amount of finesse I could bring to it’.

I have felt something similar with Palo Santo. I’ve wanted to write about this oil for a long time, but I’ve kept putting it off because I never felt I knew how to do it justice.

However it is such a magnificent, important and potent oil — and highly relevant to the times we live in — that I have convinced myself that an attempt should be made to introduce you to its extraordinary properties and powerful personality.

Palo Santo means ‘Holy Wood’ and it belongs to the Burseraceae family which also includes Myrrh and Frankincense. These two facts alone may give you a clue about its properties and uses, and you would be right! It is a powerful ‘ethereal’ oil. But there is an extraordinary twist with Palo Santo. When you experience it you find that in addition to the mysterious spiritual energy, the oil has an unusual lightness, a freshness, a freedom. The first experience of the oil, which has a aroma that has been described as ‘buttery, minty, aniseed-like’ often elicits a ‘wow’ response. ‘Gosh, that’s interesting. That’s delightful. Unbelievably uplifting.’

If you have a look at its incredibly complex biochemical signature you’ll find that the second most abundant chemical is Limonene. Now Limonene is the compound that we find in the rind of oils that are expressed from citrus fruits. Lemon typically has 68%, Mandarin 75%, Sweet Orange and Grapefruit 94-95%. Limonene is the component that gives these oils zest, lightness, and their spring-like freshness and vitality. So what on earth is it doing in the heartwood of a tree? Not only that, but the story becomes even stranger because the resin from which the oil comes only develops after the tree has reached the end of its lifespan after about 100 years and has lain untouched on the ground for 4-10 years. Vitality emerging from decay!

Herein perhaps lies the key: The theme of Palo Santo is of transition, of rebirth. Palo Santo is known by the indigenous people of Ecuador as ‘the tree that perfumes the axe that wounds’. This as Malte Hozzel points out in his blog, reminds us of ‘a universal mystery, expressed in the symbols of a paradox: encountering pain or being frightened by death is a secret key to opening the gates of a possible resurrection’.

• Highly Complex Chemical Profile: alpha-Terpineol (19%), Limonene (13%), beta-Bisabolene (12%), Carvone (7%). Alpha-Terpineol is a monoterpenol which is a major component of pine oils, is antibacterial and antiviral and a good general tonic. Limonene is a main component in citrus oils and supports sleep, relaxation, digestion, and also a good general tonic. Beta-bisabolene is a sesqueterpene and anti-inflammatory. Carvone is a ‘mild’ ketone, but it is still a ketone which means the oil is not suitable for pregnant women or children.

• Traditional Uses: The wood is used by the indigenous people of Ecuador and Peru for ‘smudging’, to purify the atmosphere in living spaces.

• Digestive support with special emphasis on the pancreas: According to Traditional Chinese Medicine the pancreas is associated with ‘thinking’ and suffers when we are unable to ‘mentally switch off’. The constant mental bombardment that we all face makes it no surprise that worldwide pancreatic disorders are on the increase. Palo Santo has a special affinity with this organ, allowing transcendence and acceptance, and supports the spleen and liver as well.

• Psychological: The oil has a calming influence and can also aid concentration. It can enhance confidence, reduce irritability and restlessness. Furthermore it brings a feeling of ‘being protected’, and makes you feel centred and balanced.

• Psychospiritual: Palo Santo assists in subtle energy work and is a great aid to meditation. It encourages trust and is an amazingly powerful ‘auric cleanser’ with a particular effect on the 6th chakra.

• Cautions: The presence of even small amounts of ketones makes is unsuitable for children and pregnant or nursing mothers.

• Method of use:
– As a non-skin irritant it can be used directly on the skin, for example the pulse points or temples.
– Mixed with a carrier oil and in combination with other oils for massage.
– Room diffusion, as a room fragrance and also a meditation enhancer.
– When travelling as a protective shield against environmental influences.

• Palo Santo Hydrolat: Palo Santo produces a beautiful hydrolat which has only recently become available. Spray yourself before yoga, meditation, etc., to help to ground and calm the mind. You can also use it in the same way to calm the nervous system and awaken mental faculties. This is a wonderful way to stimulate creativity and inspiration, and also to clear away negative energies in a hotel room, etc. You can also use the hydrolat as a hot or cold compress, on the stomach, for example. Spray it on the feet for instant uplift.

My own strange connection with Palo Santo

Some years ago (2008) I was in the jacuzzi at the public swimming baths in Cambridge when I met a Shamanic Healer from Peru. It was a normal day.
I had been enjoying my silence, when two ladies got in and started talking very loud in Spanish. After a period of time I got out to get a drink, caught the eye of one of them and offered her some water too. Thus we started talking. They turned out to be mother and daughter. The mother was in her 60s and spoke no English, and the daughter about 40 and taught at a school in Cambridge, so she was able to translate.

Within a few minutes Sylvia was telling me all about the changing value of time, the effect of the new enhanced radiation stream that our planet would be exposed to, and the impending arrival of intergalactic masters through portals on Easter Island in the Pacific. Then she threw in some details about the fault lines in my parents’ marriage and why it had eventually broken down. As I say, it was a normal day!

Anyway, we became firm friends and one day I arrived at their house in a village outside Cambridge to find they were ‘smudging’. This is an ancient shamanic practice of using the smoke from smouldering wood to clear evil spirits from an area (in this case her daughter’s kitchen!).
I asked what wood she was using and was told, ‘Oh you won’t know it. It is called Palo Santo.’ I fished in my pocket where I was carrying one oil only. Of course you know what it was.

This article has developed from long conversations with my ‘Aromaguru’ Dr Malte Hozzel, and also with Lydia Bosson. My grateful thanks to both.

Feedback from a customer…

“This had remarkable result on my wheelchair bound son who had chest congestion! He inhaled it from the bottle I bought recently from you and said he’s 100% OK and its cleared it.”